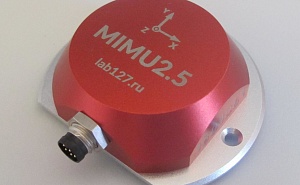 The Nanoseti small innovative enterprise or PetrSU presented the module of inertial navigation MIMU2.5.  The module calculates not only its own spatial orientation, but also reconstructs motion patters of a pedestrian or vehicle. Technical properties of the MIMU2.5 exceed the properties of world analogues owing to the in-built algorithms of autocalibration of the module during operation and special filter of signals from accelerometers and gyroscopes.

On April 20 PetrSU hosted scientific seminar that featured report of the Associate Professor of the Department of Information and Measurement Systems and Physical Electronics, Candidate of Physical and Mathematical Sciences Aleksey Moshchevikin on the developments of his team. He told about the properties of the microelectromechanical systems and their use in inertial navigation and presented autonomous multicomponent selfcalibrating inertial position control system developed in the framework of the international Russian-German project under the IRA/SME program. The module MIMU2.5 has an elegant anodized aluminum casing. Small scale production has already been launched.

The developed module and systems based on it can be applied in navigation inside buildings (for instance for calculating motion patters, determining floor, motion in a lift, vertical speed in ascending and descending), in outdoors navigation at sports and entertainment events, pilotless aircrafts, other robotized mechanisms, in recording and analyzing motion patterns, in medical applications (monitoring of patients and analysis of their movements, for example in diagnostics of Parkinson’s disease) and other areas. The results of the project will be demanded by the local position control systems, for instance in mining industry, as the basic vector of development of such systems lies in creation of technology of merging heterogeneous information including data received from modules of inertial navigation.

The audience took great interest in the report and asked a lot of questions regarding technical and commercial prospects of the project.

More information about the module (in Russian)