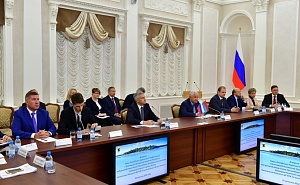 The delegation from China consisted of the Ambassadors Extraordinary and Plenipotentiary of the People’s Republic of China to the Russian Federation and other officials.

The First Deputy Secretary of the Security Council of Russia Yuriy Averyanov opened the meeting. He highlighted that the partnership between Karelia and Fujian can provide closer relations between countries: “The Agreement was signed in Beijing on November 1, 2017, by the heads of the governments and established the cooperation. Now we have stronger relations. The range of industry agreements is expanding, especially in such spheres as energy, higher education, culture, tourism, trade, and others”.

Yang Jiechi in his speech highlighted the speed and dynamics of the development of cooperation between Karelia and Fujian. He also added that the development of relations between the regions is supported at the highest state level.

In his report on the cooperation between PetrSU and the universities of the Fujian Province, Vasiliy Katarov, the Vice-Rector for Disciplinary and Social Work of PetrSU, told about the main directions of collaborative activity. He told about the visits, students and professors exchange, teaching and development. Thus in March in 2017, the delegation from the Fujian Province visited PetrSU, in October the delegation from the Republic of Karelia visited Beijing. In November Petrozavodsk State University, the Flagship University of the Republic of Karelia, and Fuzhou University signed the Memorandum of Understanding.

In the framework of Agreement on Cooperation between the Republic of Karelia and the Fujian Province, PetrSU hosted a delegation from Fujian Agriculture and Forestry University. The Chinese delegation visited the Institute of High Biomedical Technologies, Museum of History, Youth Innopark, IT-Park of PetrSU, and Botanical Garden. In August PetrSU took part in the Fujian Province week in the Republic of Karelia.

This year five students from PetrSU got grants from the Province and in September they will go to Fuzhou University to study the Chinese language for one year.