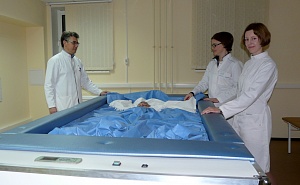 Science Does Not Stay Still, It Develops!

Dry immersion method is one of the methods to imitate zero gravity applied in cosmonautics. It is already used in rehabilitation of patients who suffered a stroke, people with cerebral palsy, in healing burns, prevention of after-effects of perinatal anoxic damage to the central nervous system in children. The dry immersion method was suggested for treating hypertensic crisis.


Dry immersion method is one of the methods to imitate zero gravity applied in cosmonautics. It is already used in rehabilitation of patients who suffered a stroke, people with cerebral palsy, in healing burns, prevention of after-effects of perinatal anoxic damage to the central nervous system in children. The dry immersion method was suggested for treating hypertensic crisis. In the course of three years, the Institute of High Biomedical Technologies of PetrSU has been doing research on the impact of dry immersion on certain symptoms of Parkinson disease under the leadership of Professor Aleksandr Meigal. Professor Meigal is a graduate of the Faculty of Medicine of PetrSU (1987), Head of the Department of Physiology of Human and Animal, Pathophysiology, Histology of PetrSU, participant of the Mars-500 project, Doctor of Medical Sciences (1997). He has supervised 10 theses (9 for the title of Candidate of Sciences, 1 for the Doctor of Sciences).

–        Aleksandr Yurievich, the dry immersion method is now widely integrated into research and medical practice. It has first been used in training cosmonauts. Why have you started researching this method? What has prompted that? And why Parkinson disease?

–        Indeed, this method is used in research on the impact of zero gravity on human organism in earth-bound conditions. As the dry immersion method induces zero gravity effects 7 times faster than, for instance, Bed Rest it is definitely applied in translational medical research. The dry immersion method implies immersion (except head) in warm water without contact with the water with the help of a thin film in which a person is wrapped. It creates an effect of no support, uniform compression and hypokinesia. As a result, a person loses the sense of gravity as he or she is not counteracting it due to the lack of support and the uniform compression of water. Therefore a person is “hanging” in space. It is ideal analog microgravity. Form a physical point of view, the dry immersion method is a force based on buoyancy, buoyancy force and Pascal law. In earth-bound experiments, this method is used for days, weeks, and months, which allows almost complete imitation of a real space flight of any length. First of all, zero gravity decreases muscle tone, particularly in extensors, which counter gravity.

Since 2007 our Laboratory of  New Methods of Physiological Research has been engaged in describing physiological state of skeletal muscles using modern methods of processing electromyogram in patients with Parkinson disease. This project is implemented in cooperation with the Department of Applied Physics of the University of Eastern Finland in Kuopio. Patients with Parkinson disease have increased muscle tone (rigidity), alongside tremor, dormancy, and bradykinesia (slowness of movements), comprising three most noticeable symptoms of Parkinson disease. We have gained considerable recognition around the world, as we have shown the ability to assess tremor in patients by the presence of “hidden” rhythms visible with such parameters as entropy, recurrence, dimension. Thus, we had an idea to put a person with increased tone (parkinsonian) in conditions that decrease the tone. This idea was born in discussions with colleagues in State Scientific Center “Institute of Medical and Biological Issues of the RAS” (Moscow, Russia). As the dry immersion method was originated there in this Institute in the 70s, all the intricacies of its application for the decrease of, for instance, spasticity after a stroke, as well as all insertion and withdrawal criteria have been well developed at the Institute. We have purchased a complex of artificial zero gravity under the Strategic Development Program of PetrSU and started our work.

–        Who else is involved in the research, just scientists, specialists of the Institute of High Biomedical Technologies of PetrSU?

–        Our team consists of the Laboratory of New Methods of Physiological Research, Institute of Medical and Biological Issues (Moscow, Candidate of Biological Sciences Saenko I.V.), the Department of Applied Physics of the University of Eastern Finland (UEF, Professor, postgraduates), neurologists of the Institute of Medicine of PetrSU, resident physicians. Moreover, at the first stage, the research involved scientists of the Neurology Research Center (Moscow). Participation of neurologists is essential as we need constant medical supervision.

In the last year the team was complemented by those who can contribute to collection and analysis of signals, for example the group of Associate Professor Dmitry Korzun with whom we are attempting to create an automated system of data collection, the group of Associate Professor Aleksey Moshchevikin that reconstructs trajectories of patients’ movements before and after immersions using data from sensors. Therefore our project is multidisciplinary as it involves physiologists, pathophysiologist, neurologists, physicists, mathematicians, ICT specialists. In the future, the project might become transdisciplinary, i.e. include specialists who are removed from the original idea, such as psychologists, psychiatrists, philosophers. The Finnish colleagues have provided an opportunity to work on the supercomputer in Espoo for statistical processing of the data, performed by UEF postgraduate G.G. Miroshnichenko.

–        The research was launched almost 4 years ago. What achievements do you have?

–        The project has been active for quite a long time, and it should be mentioned that is has undergone some changes. For example, we have encountered such an effect of the dry immersion as a significant decrease of arterial pressure, and that should be taken into consideration during an immersion session. We have also discovered that patients with Parkinson disease show improvement of cardiac rhythm and autonomous neural system as a whole. This effect of the dry immersion on an organism is studied by Professor Liudmila Gerasimova-Meigal. The project has also made us develop methods of biomechanics, otherwise, we will not be able to prove that motions are considerably improved, and are not a placebo effect. Now, alongside a system of motion capture that we have fully appreciated and mastered (engineer K.S. Prokhorov), in cooperation with the group of Associate Professor Aleksey Moshchevikin we analyze the movement of the head during clinical motion tests, which we regularly find and introduce. The range of clinical tests of the project has been vastly increased and improved over the last three years. We are gradually introducing a smartphone with its accelerometer and gyroscope.  We also had to immerse ourselves into the issues of ambient intelligence for research automation.

–        Your research has brought tangible results, can you tell about them?

–         Initially, the project was planned for 8 years (2 stages of 4 years). The first stage is almost over. We have discovered that quick immersion, i.e. single immersion session, has a strong effect on practically all studied systems of the organism, while a course of immersions has a considerably weaker effect. According to clinical scales, there is an effect. Our examinees note an improvement, now we have to protocol that improvement instrumentally.

–        What improvements are noted? What a person can do? How is his coordination improved? Motions, mood?

–        Overall we have discovered that our original idea, the response of rigidity to zero immersion, works. After a single session of dry immersion rigidity in patients with Parkinson disease is, according to clinical scale, decreased by 30-40%, but over a course this effect is less pronounced as it decreases by 15-20% (statistically significant). However, it is a quite considerable effect and it lasts for more than two weeks, and this too is a great result.

The aforementioned clinical changes are seen thorough faster walking, decrease in rigidity right after immersion, improvement in activities of daily living. Many examinees acquire a better ability to perform fine movements (hold a cup, fasten buttons, use table-ware). Still, it is distinctive in all the examinees. We have discovered that non-motor symptoms improve more than the motor. Apparently, the function of the motor system is more stable than, say, mood or cardiac regulation system.

–        Can the dry immersion method help everyone in need? Are there any contraindications?

–        The dry immersion method, as real zero gravity, has an immense effect on an organism, even of a healthy young man, as it changes arterial pressure, the blood is redistributed in the organism, muscle tone changes. There are a great number of contraindications to this method, including vein diseases, liability to thrombosis, arterial hypertension, oncological diseases, renal diseases, pronounced osteochondrosis, and others. Age of over 70 years is also a contraindication. Against these (and many other) criteria we have denied many candidates participation in the project. At the Department of Neurology and Psychiatry of PetrSU and our Laboratory we carry out a comprehensive pre-course examinations of candidates. Paradoxically, the dry immersion method is designed for healthy people, while a patient with Parkinson diseases without comorbities is quite rare. But we adhere to strict selection criteria. During the research, we are turning more to middle age examinees, with a smaller term of diseases, i.e. the people who we can actually help.

–        We are not only working on the project. The project too is working on us. We have changed in these last four years. We have reached the frontiers of research with modern technologies, for instance in motion assessment, electromyogram, and cardiac rhythms. In other areas, we stay at an appropriate level. We have a small laboratory, and unlike large institutes, at every stage, we do everything ourselves: talk to patients, register, upload and analyze data, write papers. Alongside us, we have postgraduates, clinical physicians and students who study physiology, design and methods of research, the concept of a scientific experiment. Each experiment teaches us something. One my good acquaintance, founder of a Finnish company producing electrophysiological equipment, has once told me that he had a small company that produced few machines, yet they have to be better than analogous machines, otherwise he would not survive. In the same vein, it is easier to brew better coffee in a smaller café. We brew our scientific coffee in our small laboratory and guarantee result to ourselves. Similar systems of dry immersion exist in Moscow, they have been introduced in France. Competition increases and we have to be on par. On the other hand, works prepared by our colleagues on immersion helps us better understand our work.

What is next? We have performed over 200 sessions of immersion and saw that zero gravity has an effect on the condition of a patient with Parkinson disease, yet we do fully understand at which level it works: spinal cord, structures that regulate tone, or systems responsible for higher brain functions. We need dependable metrics of muscle tone, for instance, viscous-elastic muscle properties, neurovisualisation, of which we can only dream. We need a specialist in modern electroencephalography. We will study more the effect of dry immersion on a healthy organism in order to better understand its effect on a person with a disease.

–        Have you already presented your achievements in scientific journals, at conferences, symposia?

–        We have started publishing papers. In 2018 we published out data in the Frontiers in Neurosciences (WoS), in Physikalische Medizin, the journal of the German and Austrian Rehabilitation Society. As there are plenty of data we will spend a year processing them, interconnecting various parameters, creating databases and preparing articles for international journals.

In 2018 we made reports about our results at the 29th conference of the International Society of Gravitational Physiology (ISGP) in the research center of the European Space Agency (Noordwijk, the Netherlands), at the 8th symposium on postural regulation (Smolenice, Slovakia), at the 8th Pathophysiology Congress (Bratislava). As a result, we have been given great leads to possible effects of zero gravity on the motion system, nervous system.